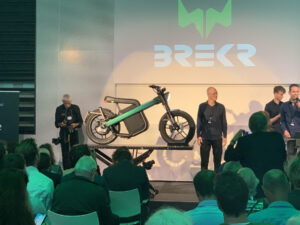 A powerful look, but without the noise, exhaust gasses and negative effects on the environment. Last month, Brekr revealed the highly anticipated prototype of their new electric moped, the Brekr Model B. The well-organized event took place in Dru Cultuurfabriek, Ulft hosting about 200 people, including journalists, representatives from supporting companies, as well as family members and friends of the Brekr team. The dddrop and CAD2M teams came to support Brekr and celebrate their outstanding achievement.

The Brekr model B prototype was a long time in the making, and the Brekr team had to overcome many design and manufacturing challenges along the way. Dddrop was able to help Brekr with some of the project’s challenges regarding the battery casing for the prototype. Brekr needed to quickly and efficiently create a visual representation of the battery casing for the prototype launch and saw the benefits of the dddrop EVO Twin, which lead to a great collaboration between the two Achterhoek companies. Using the dddrop EVO Twin allowed a much faster production due to the large build volume the printer holds. The large battery casing had to be printed in parts due to its size and shape, and the dddrop team was able to print the casing in only six parts, which was a substantially lower number than before. In addition, the team was able to reduce the amount of supporting the material needed for the print which also affects print time and cost-efficiency. Overall the dddrop contribution and the dddrop EVO Twin performance crowned a success.

CAD2M also got the chance to get involved in the development of the battery casing by providing a thorough examination of the part design in SOLIDWORKS Simulation. The casing design has to withstand great forces while holding an appealing appearance, so there was a need to test the design before starting the printing process. SOLIDWORKS Simulation saved the team time and resources as the CAD2M team could pinpoint issues with the design and fix them quickly all in the software without printing a single layer of filament.

The Brekr Model B was developed in the company’s facility in De Kruisberg, Doetinchem, which in the past served as a prison. Developing an electric moped in a building that used to be a prison comes with great symbolism of breaking out of the chains of unsustainable energy and advance to a more sustainable future.

Who is better for a green initiative project then the green hearted Achterhoek companies? The dddrop team was extremely enthusiastic when the Brekr team reached out for help. The connection gave dddrop an opportunity to not only show the great capabilities of the dddrop EVO Twin but also assist a fellow Achterhoek-based company in a green initiative project. dddrop is proud to take part in such a great project and is highly satisfied that Brekr saw the potential of the EVO Twin machine.

We use cookies to ensure that we give you the best experience on our website. If you continue to use this site we will assume that you are happy with it.AcceptNoRead more