Dddrop has Exciting News in the Near Future

Dddrop has Exciting News in the Near Future

dddrop has Exciting News in the Near Future 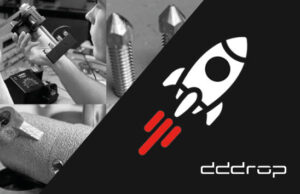 On March 4th this year, dddrop is expected to launch its brand new printer at the RapidPro 2020 event in Veldhoven. The new model will introduce new technologies and featured that will unlock great possibilities and allow greater results. This will be the most advanced dddrop machine to ever be built and will be available for order shortly after the launch in March. The CAD2M Additive Manufacturing team wants to invite everyone to the RapidPro event to see, feel, and test the new generation 3D printer by dddrop.

The last 3D printer dddrop introduced to the market was the dddrop EVO Twin, which quickly became a reliable companion for many businesses, factories, and start-up companies all over the world. The dddrop research and development team has been working over the past year on developing a new and improved dddrop printer. The new design is still kept a secret in the R&D department of IF-Adamas, the parent company of the dddrop brand, but the dddrop team promises a refreshing new look and many new features alongside the already exceptional features from the predecessor.

“We gathered years of experience and knowledge of 3D printing and the manufacturing market into the new design”, says Alfred Uytdewilligen, owner of CAD2M and head of the IF-Adamas R&D department, “we tailored the machine for innovative professionals and we are working day and night to deliver a product that will help unleash their creativity”.

CAD2M decided to unveil the new printer in the RapidPro 2020 event, taking place in Veldhoven on March 4th and 5th this year. RapidPro is the annual showcase event that brings together the greatest innovators in the BeNelux in the field of digital production and additive manufacturing. The event will take place in the Eindhoven Conference Center Koningshof in early March. CAD2M will occupy the exhibition floor during the event and is projected to unveil the new dddrop printer early on March 4th.

We use cookies to ensure that we give you the best experience on our website. If you continue to use this site we will assume that you are happy with it.AcceptNoRead more
Revoke Cookies